An Adventure – Learning to Skydive

To get a Class C skydive license, you need a whole bunch of jumps. In New York, because of the vagaries of the weather, it can take a while to amass them.
So far I’ve done two.
This is the story of the first… 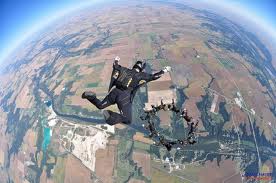 It's easy. Just let gravity do the work...

I was going to take a friend of mine for his birthday. Turns out he was over the weight limit, but I still wanted to go, so I signed myself up.
Before the first jump, the diver has to take a class. The class goes over what a correctly opened parachute looks like, how to correct an incorrectly opened chute, and how to land. For the chute opening, we looked at pictures. For how to land, we jumped off a picnic table 20 or 30 times, and rolled into the grass.
placeholder
All of that training was useless, as you’ll see.
placeholder
Today, the governing body of Parachuting, the USPA, will let accredited training schools only do tandem jumps for their first jump.
A tandem is where the new jumper is strapped to the front of the experienced jumper.
It is much safer, much more controlled, and lots of fun.
But not near as much fun as possible. 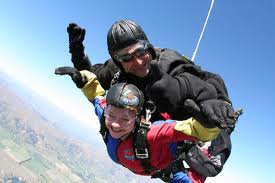 Does this guy on my back make me look fat?

When I did it, Static Lines were still allowed for first jumps.
That means that the parachute is strapped to the jumper, and the chute release is strapped to the plane. When the jumper goes out, the line stretches to its full length, then pulls the chute open. The jumper doesn’t have to pull the rip cord, but does control the rest of the jump.
Much scarier. Much more fun! 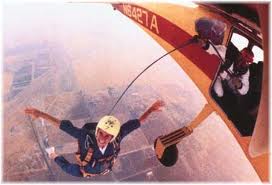 placeholder
The class (pictures and picnic table) are what you’re paying for for the first static line. They throw in the jump for free.
“Oh cool”, I can hear you say. No, not so much. Here’s why:
Anyone can sit through a class, look at pictures, and then shuffle off a picnic table two dozen times.
Many people get up to 3000 feet, look out the window,and scream to be put on the ground immediately.
No problem. But the jump was free. So no refund.
placeholder
That didn’t happen to me. Nor was I phased by the fact the wind needed to be perfect (15 knots or less) for us to go. Which it wasn’t. So, we all sat around for a couple of hours after the class waiting for the wind to come down.
It didn’t.
I went back up the next week.
Still didn’t.
The next week?
Too windy.
Six weeks this went on. I drove up about 60 miles, the wind didn’t come down, I drove home.
placeholder
Then one day, it was perfect.
placeholder
Many people say they don’t understand why someone would jump out of a perfectly good airplane. This one wasn’t.
The pilot was sitting on a milk crate, and he was wearing two parachutes.
The engine, when it started, sounds like I do when I wake up, and I’m a pack a day smoker. Lots of coughing.
2 other brave souls made it out that day too.
The three of us got suited up, strapped on our parachutes, and climbed into the plane.
And up we went.
placeholder
Here’s what happened…
The first guy got into jump position. Out he went. His chute opened.
Then he panicked. And opened his emergency chute. Without releasing his main chute.
So he has his rectangular air foil chute opened over his round emergency chute.
Which means? Anyone?
Exactly. No control.
He landed in a tree. 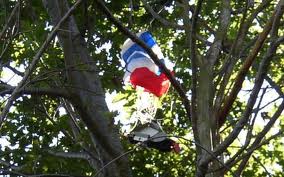 Not in the sky, not quite on the ground...

The plane circles the tree to guide the truck in to recover him. He walked away with some cuts and scratches, not even stitches were needed.
So now it’s me and tree-boy’s friend. Jumpmaster looks at us.
“Still want to go?”
The other guy looks nervous. His friend just had a serious problem and happened to get lucky. He was concerned. I understand that. He shook his head and declined.
It made perfect sense. I mean, skydiving is inherently dangerous.
But I’d been driving 120 miles a week to get here, this is the closest I’d been yet, and dammit, I really wanted to go.
“Yeah!” I said.
placeholder
The Jumpmaster gave me instructions and I followed them.
“Turn around and slide up to the front of the plane”
Sitting on my butt, I pushed myself to the front until my back was against the dashboard. (Where I could see that the pilot’s milk crate seat wasn’t even bolted down!)
Jumpmaster grabbed my static line and secured it to the floor.
“Tug the line to make sure it’s secure”.
I gave it a yank. Yeah, secure, sure. What the hell do I know?
“Okay. Reach out of the door, put your hand on left hand on the wing strut and your feet on the step above the wheel”
I rotate half out of the plane. don’tlookdowndon’tlookdowndon’tlookdown.
“Grab the strut with your other hand, stand up and step off”
don’tlookdowndon’tlookdowndon’tlookdown. I grab on stand up and…step…off…
Now I’m flapping alongside the plane at 80 or so miles an hour. My arms are wide apart and have the strut in a deathgrip.
“Look up and let go”
placeholder
The proper body shape for an exiting skydiver is an X, arms and legs out, back arched. This position catches the wind and keeps the jumper from being flipped over. The “look up” instruction is for the diver to look at the dot painted on the bottom of the wing, thereby getting the back arched prior to departure.
placeholder
I look up. And start an internal dialogue with myself.
“Okay Guap. On three, let go. One, Two,Three”
…
“You didn’t let go”
“I know”
“Lets try again”
“Ok”
“One, two, three”
…
“You didn’t let go again”
“I know”
“Why didn’t you let go?”
“I don’t know”
“Lets talk about this”
“Ok”
placeholder
As I’m having this pleasant conversation, I feel something on my left hand. So I look over.
And this motherf****r is leaning out of the plane, peeling my fingers off, one by one.
And I think to myself that if my left hand lets go and my right one doesn’t, I am well and truly screwed.
placeholder
So I let go….

129 responses to “An Adventure – Learning to Skydive”