HI THERE!!! So I got an angry email from the storage unit that the smell of brrraaaaiiinnnnsss was starting to drive off the other customers, Which I guess means it’s time to dust off the Friday Foolishness. And it’s a special edition, too!
But for now, lets just dive right in, shall we?
Last time we did this, we asked what you’d want on a desert island. And judging from your answers, a therapist wouldn’t have been out of place! Here’s what you said. (As always, my comments are tanning in italics.)

An island of delicious in a sea of dance floor!

some company…Lorre (Articles of Absurdity)
(Wouldn’t that defeat the purpose?)
…for it to be that island Gilligan landed on. They had everything! – Brian
(Except a boat…)
a bridge to the mainland (Stacy)
(Would that be one of those “bridge to nowhere” thingies?)
A never-ending supply of naughty female natives 🙂 Andro
(Careful – naughty might mean they eat you with the wrong fork!)
hmm. i didn’t know deserts had islands.
(Yes, in the stream. That is what they are.)
(Anyone? Anyone?)
BOOBIES! – Revis
(I think the tropical heat is causing hallucinations…)
Desert island or deserted island? I would still like dessert. sandylikeabeach
(Does a viennese table count as an island?)
Butterscotch. It’s not dessert without butterscotch. SilkPurseProductions
(Whipped Cream is appalled at your faithlesness.)
Is this like Life of Pi, but with chocolate bunnies instead of a tiger?
(Melted chocolate bunnies are much scarier than tigers.)
How about a helicopter? Benzeknees
(Then you’d need one of those hot air force pilo- Ohhhh…)
Being deserted would be enough. – Hotspur
(WE HAVE A WINNER!!!)
A Tardis ~Miss R
(Would the chameleon circuit make it look like a cabana?)
My kids to be in civilization. At least it will be quiet then. (UndercoverL)
(If you bring them, there’d be nothing but the sounds of you burping after a good meal.)
PMAO says; my penis… this is my answer for all of these from now on.
(If you were going to go with “penis”, shouldn’t you have added “sunscreen”?)
A bunch of smokin’ hot guys to be stranded with. And don’t hurry with the boat. Madam Weebles
(The boat will be speeding there. With their wives.)
A volley ball friend and movie written about it. –Lily In Canada
(But does Keanau Reeves have the emotional range to play a volleyball?)
The super power of teleportation. Carrie Rubin
(It would be very super! Until they expected you to use it to get to work sooner…)
A round king-sized bed. No hospital corners-Gobs of man pillows+a huge tub. Red.
(

)
The letter S so I could make it a dessert island! Linda Vernon
(There’s probably plenty of S! (cargot.))
Bring it! Married & pregnant. I would LOVE a desert island above all else! Quirky
(Yes, but then where will you get chocolate ice cream covered in pickles?)
a library, Matt Bomer (let’s ignore his sexual orientation) and a goat –Rutabaga
(I think the goat is concerned about his potential orientation…)
Ginger and Mary Ann to join me….SnB
(You realize they’re in their 80’s?)
My wife and access to WordPress (Frank)
(Wouldn’t one take away from the other? Or is that just me?)

Congratulations to Edward Hotspur for this weeks (last weeks? The week before?) winning answer! And from the offered choices the most popular was Umm…I’d just like a boat to send the rest of these crazies off this island so I can enjoy the coconuts. And my goat. Because who doesn’t love a goat? (Where that sort of thing is legal…) 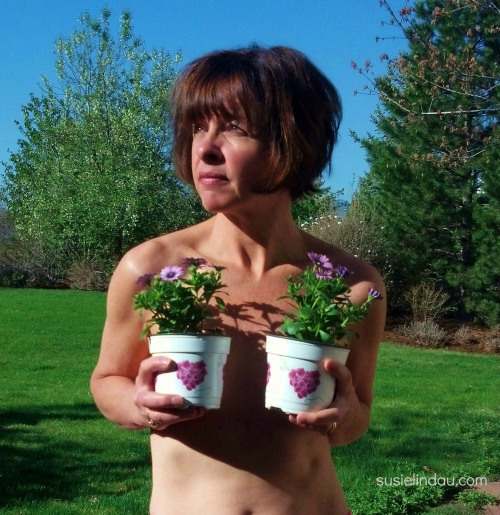 And so we come to this weeks poll. Not the poll I was planning (you lucky people!), but one that (I hope) will only need to be done now.
I’ve always said I know the coolest people in the sphere. One of the bloggers I followed early on was Susie Lindau, self described Wild Child: Moustachioed Skier, Hiker, , Bon Vivant. Susie has breast cancer. Today she’s getting surgery and a double mastectomy to minimize chances of relapse.
She doesn’t want to be defined as “cancer survivor”, and she still has great things in front of her. So for this weeks poll, I’m asking you all for help for her. Help for her to get through her surgery.
And Metaphorical help in describing exactly how she’s gonna beat cancer.
So that’s this week’s poll.
Answer as often as you like, but answer by 2359 EST on Wed, 5 June. Because that’s when this one ends.
Oh, and if you write in an “other” answer, write in your name too, and I’ll link back to you next week.

Have a great week everyone. And you too Susie!