An Adventure – Learning to Skydive Part 2

When last we left our intrepid adventurer, he had just let go of a tiny plane…
……is leaning out of the plane, peeling my fingers off, one by one.
And I think to myself that if my left hand lets go and my right one doesn’t, I am well and truly screwed.
placeholder
So I let go….

placeholder
…and I don’t know how much time passes…
placeholder
…if it’s 5 seconds,5 hours or 5 years.

But I don’t remember anything until I look up and see my canopy open above me.

Every skydiver I’ve spoken to tells me the same thing. None of us remembers the first moments of our first jump.
I think it’s because of the enormity of it, the stepping out into nothing. The brain has no frame of reference, no way to understand what’s going on. So there’s a gap.
placeholder
Modern parachutes are air-rams. There is a row of cells that hold air. Using the steering lines manipulates how much air is in the cells on the ends and gives the skydiver steering and speed control

placeholder
After I come out of the confusion and see that my chute opened correctly (as shown in the classroom pictures. I have no idea what I’d have done if it wasn’t) I fit my hands into the loops on the control lines. Then the voice of the spotter comes over the one way radio.
The spotter is standing at the landing zone with a pair of binoculars, watching me and guiding me in by telling me when, how long, and in which direction to turn.
It’s a one-way radio because, as the instructor put it, they don’t want to listen to everyone screaming.

I knew the spotter could see my reaction through his binoculars, because he was laughing along with me and cheering me one.
Then we moved on to tricks.

To steer an air ram parachute, one of the lines is pulled. That collapses some of the cells on the end, causing the chute to turn towards the collapsed cells. So the spotter tells me turn left. And hold it…and hold it…hold it…
And I start whipping around, centripetal force stretching me out from the canopy, almost parallel to the ground, faster and faster, the view below me blurring as I whooped it up. Talk about going around in circles!
That’s also the moment where you find out exactly how strong your stomach is.
Mine did fine, thanks.

Gravity does its thing, and I drift slowly towards the landing zone, making my turns and just enjoying the view.
My jump was from aobut 2,000 feet, and I was under canopy and floating along by about 1500 feet. Not so high for things to be unrecognizable, but high enough (and peaceful enough) to enjoy the big picture,that feeling of connectedness to everything. It was strange, feeling so serene with so much adrenaline flowing through me, but somehow, that just made it more perfect.
So I float in, making my turns as they’re called out to me.The ground gets closer.
When navigating in for the landing, ideally the diver moves into the wind, so that the wind will slow his speed as he comes in.
And I realize “slow” is a very relative term.
Unlike, say, “rushing”. The ground is rushing towards me.
And it’s surprising enough, as I close that last 100 ft stretch between me and earth, that it doesn’t even occur to me to rattle off some Hitchikers Guide on the the way down.

At about 20 feet, the spotter yells for me to flare.

Flaring is where the skydiver pulls both control cords all the way in towards their waist, arms fully extended.
This causes the parachute to curl all the way down, and for a moment, causes the diver to lose speed.
The problem is, once the air rushes out, the chute collapses. It takes 400 feet for a chute to re-expand.
Just keep that in mind, and don’t do this too early. 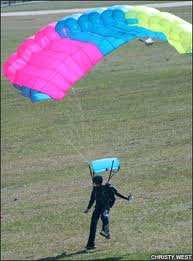 No. No, I didn't look anywhere near that good.. Even if I did have cooler colors.

I flare, and dump enough speed to keep from really really hurting myself when I land.
Instead, I only just really hurt myself.
Remember those practice landings jumping off the picnic table?
Those have nothing to do with real life.
Add in the fact that I had plenty of forward momentum, and the landing was just comical.
My feet hit the ground. I rolled forward, dragged by the parachute.
It yanked me over to my knees. Onto the rock.
Seriously, in a field that big, how did the guy guide me into a spot that guaranteed that my knee would smack into a rock at 15 miles per hour?
I have no idea, but it’s a skill.
And I was down.

A moment later, I open my eyes, and see the spotter standing over me, a big grin on his face.
And I let out a shot of joyous, elated pain!
He laughs and asks me what’s wrong.
I tell him and congratulate him on his aforementioned skill. He laughs again, and helps me up. We gather up my parachute and I set off, limping, back to the shed, a million square yards of nylon flapping around me.

There was only one downside. I had paid for them to take a picture of my exit – that moment when I let go of the wing strut.
The Jumpmaster didn’t snap it.
He was too busy peeling my fingers off the plane.
Bastard.

Fortunately,the experience is one I’ll never forget. And now I want to go and do it again.
😀 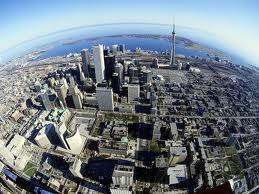