Today’s Music: Joe Cocker. See below.
Days Til Spring: 58 (and it’s snowing like mad here, so I can’t wait for the warm!) 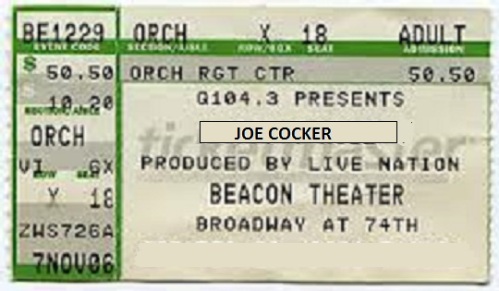 Soul, R & B. Rock and Roll. All those styles are alive and well. There are great new bands putting out incredible music, and it’s possible to step right in and enjoy it no primer needed.
But there are acts that came before that pushed the envelop. They broadened horizons and brought music no one knew right into our ears.

Joe Cocker is one of those acts.
So when he was paying the Beacon Theater, maybe 15 years ago, and Big Mike asked if I wanted to go, there was only one possible answer: Hell yes!

It was a typical concert night – meet in the city, grab a beer and some food, then head into the Beacon. Grab another beer or a soda, and head in to find our seats. The Beacon theater is a grand old room. Floor, Mezzanine, Balcony. Sculptured roof with gold gilding. Wide stage that extends almost the width of the hall. Semi comfortable seats, with almost enough legroom for someone six feet tall.

So we’re settled in our seats (floor level, towards the back), and the lights go down. No opening act, so this was for Joe. The crowd surged to its feet as the PA announced Joe Cocker!!! Out strode the band, taking their positions, and Joe followed right behind.

The band kicked in…
Joe grabbed the microphone..
And then…
He played, note for note, the entire Best Of Joe Cocker album.
Don’t get me wrong, it was a good show. And seeing Joe Cocker moving around onstage (he’d toned down the twitchiness a lot) was a sight to see. I mean, here was an important voice from the earlier days of rock and roll, who’s soulfulness bridged a gap from Black music to bring it, via England, to everyone in America. And once he did it, his influence was profound. Bands making that same sound popped up across the landscape.
To this day, when Joe comes on the radio, my head nods back and forth, my fingers tap, and there’s a little extra bounce in my step.
I think he’s a great singer, even as an older man because it added an extra gravelly-ness to a voice he still controlled well.
I’m glad I saw him, just to be in the same room and feel the music.
But overall, it was an average show, devoid of spontaneity and surprise. He still did a really good job with the songs, it’s just that he performed them exactly as expected.

One bright spot of the show – he did play my favorite Joe Cocker song:

IrishPaul Instant Messaged me on my way to the train this morning.
Here is the conversation…

IrishPaul –
Going to bed now. Was watching a movie.
Why are you up?

IrishPaul –
What kind of a****le goes to work before 6pm? Don’t forget, we’re going to The Drums next Monday.

IrishPaul –
Right. I’m off to bed alone – bonus.
You going to Chickenfoot.

IrishPaul –
I do but want to see Michael Anthony Hall and Joe Satriani. So I’ll bear with it.

El Guapo –
Have a good time.

And since I know he hates that crap, today’s music is Sammy Hagar. Because I had to be on my to work at 7 am. And he was finishing his day bartending form last night.

So there it is, a tiny snippet of my real life.

I had a great post, all set to go up today.
I started writing it yesterday at work. Finished it at home.
Left the page up on my work PC.

Hoping it’s still up on my laptop at home, so i can save the finished version and post for y’all.

It’s a good one, about cooking for a living, and leads nicely into a part 2.
That you’ll have to wait for.
Because I’m going to see Duran Duran tonight…

Today’s Music: The Cars – Move Like This
Today’s Adventure: Removing my head from my bottom

The Cars came out of New Wave, but transcended to main stream success in a way few other “New Wave” bands did.
Their songs had great hooks, occasionally great lyrics (though honestly, it was sometimes very hard to figure out what the heck Ric Ocasek was talking about!), and as a band that came of age at the start of the music video era, some great videos.

And then, in 1988, they broke up. The band members wandered off to their own projects, Ric Ocasek got into producing and writing songs for others,and Benjamin Orr, the bassist, died.

The story goes that Ric Ocasek was going through a bunch of songs he wrote , trying to decide on studio musicians to record it with, and instead, called up his former bandmates –
Elliot Easton on guitar, Greg Hawkes on keyboards (and now bass as well), and David Robinson on drums. Ric plays rhythm guitar, sings and writes the songs.
And they put out Move Like This. Which sounded exactly like The Cars.
And they announced a tour.

For me, this was a big deal. The Cars were one of the first bands I was aware of and wanted to see, but they broke up (you can keep the New Cars, thanks) and a member died, and Ric Ocasek said “no way in hell” to a reunion.
When tickets for the new tour went on sale, there was no way I would miss it.

I ended up seeing them at Sound Academy in Toronto(a story for another post), and Roseland in NYC.

Both shows were in mid-size Standing-Room-Only venues, about 2000 – 3000 capacity. Both stages were the same, both sets were the same.
They came out and opened with Let the Good Times Roll , a classic. From there they moved into Blue Tip from the new album, and the set list was a nice combination of old and new.
The sound of the new songs is so consistent to the old band that there was nothing jarring in the set list, no feel of jumping from one era to the next.
Ric Ocasek stayed up front the whole show, often just strumming his couple of chords. There was very little interaction with the crowd, and he moved very little.
Hawkes was frenetic behind the keyboard, and at times seemed a bit overwhelmed, especially when coming around to the front and strapping on the bass (when he also gave a shout out to Benjamin Orr).
Easton had several songs where his leads transported him. While The Cars are not (and never were) a jam band, his solos were interesting and far ranging, going from high tinkling notes all the way up the neck, to crunching lines that growled out of the amps.
Robinson on drums kept time solidly, but there was not much beyond the basic rhythm – no interesting fills in his set.

It was good to see them, but in some ways, it was like watching a live video of their albums. One of the joys of going to see live music is the additions, the interaction, hearing new twists on lyrics or music, and The Cars offered very little of that besides the guitar solos.
But the band was on, they played well, and as someone who waited twenty two years to see them (and got to see them twice!), I though they put on a really good show.
the stage dressing and lighting was used to silhouette the payers, and added a nice touch. The sound at both venues was great, and the music was clear and easy to follow.
The crowd was into it, and their enthusiasm made up for the straightforwardness coming off the stage.
Ric even looked a bit uncomfortable, a few times saying “Thank you” after a song, then staying at the microphone a bit longer, without saying anything, for a brief awkward pause. Then the next song would start and they’d get right back into it.

The Cars of yesteryear were icons. The Cars of today seem like they were going out there to acknowledge that, even if they couldn’t quite match it.

But their new album, Move Like This, is great.
And in the words of Irish Paul: “The Cars? Seen ’em”.