Tag Archives: Return Of The Jedi

A Literary Limerick (And Haiku!) – Star Wars: Return of the Jedi

Well, we’ve come to the end of our journey. The final haiku/limerick combination for Star Wars.
Thanks to Kayjai for thumping me on twitter and finally getting me to write the damn thing. (Plus, now I can rag her until she finishes the Kevin story. Seriously, it’s been a while since the last installment.)
And a special thanks to Mike Calahan for reminding me that this could only end with Ewoks.
(For those interested, it started here, and continued here.)

But now, we return to a time long, long ago, in a galaxy far, far away… 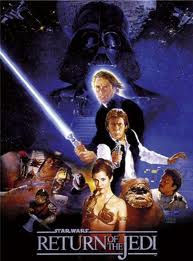 And because this is the third movie of the trilogy (Trilogy. Those horrible bits called Episodes 1, 2, and 3 are dead to me), we’re giving you three, yes three limericks to send this one off!
So without further ado, here we go.
And may the force be with you!

Star Wars
Return Of The Jedi

That Luke finds good in Vader

Leia is not Han’s sister.

It ends with a big funeral pyre,
bathrobes as mystical attire
Good defeated bad
By all, a great time was had.
Oh George, couldn’t you then just retire?

Turns out Vader wasn’t such a big meanie.
Son Luke used the force like a genie
The plan from Akbars squid-head
left the Death Star for dead,
And we saw Leia, in a gold plated bikini

Vader stopped lightning, with his deft agile blocks.
The new Death Star – reduced to burnt rocks
The force was at rest.
This tale could’ve been the best,
but alas, it was riddled with Ewoks