Travelin’ Man – Turkish For A Day

Note on today’s post: As with all my alcohol related posts, this is only as true as I remember it.

Among the many things I’ve been lucky to do, I occasionally did pick-up work as a courier: check cargo in at the airport, fly with it to the destination, and deliver to the waiting party on the far side.
I did a few of these runs. This was the one to Turkey.

It started with a phone call:
Shipper: “Hey Guap, we need an airplane part dropped in Turkey. Are you free tomorrow?”
At the time, I was taking computer classes, with no gainful employment.
EG: “What time is the flight?

So I meet the shipper at the airport. I’ve got a decent size duffel bag. He hands me a box (an altimeter for a private jet), a phone number, and an envelope of money – my pay for the job.
I get on the plane for a ride to Turkey.

This was before 9/11, so the security was not soul sucking. Unfortunately, this was after the days of no smoking on international flights. But I was travelling alone, so I wouldn’t have to worry about breaking any friendships as my nicotine fits got worse and worse.

So umpteen hours later, I arrive in Turkey. I buy a phone card.
But can’t figure out how to use the phone.
The phone is next to an airport coffee shop that has comment cards on each table, in English and Turkish.
Aha!
Friends, when you are around the world, as long as you can find a bilingual comment card, you too can translate enough to communicate with the nice girl at the coffee shop and learn how to use a phone!

So I get the pilot I’m supposed to deliver the altimeter to on the phone. He comes to meet me in the airport “Oh great, just what we needed! Get a room at this hotel, we’ll meet you in the bar later and go out on the town.”
One hour in Turkey and I know people. Woohoo!

So I go get settled at the hotel, take a quick nap and a shower, and head down to the hotel bar, Ricks American Sports Bar.
Sigh.

The copilot comes down and orders a beer. “Great!” says the pilot. “We’ll finish these and head out!” 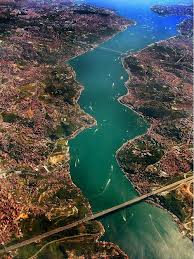 The mighty Bosphorous.
No, I didn’t see it.

The copilot works on his beer. The pilot finishes his and orders another. Then me. Then the copilot.
It’s like doing rounds of Row Row Your Boat.

The pilot is telling stories about working for the Prince of the oil republic they fly for. The copilot is telling the pilot he’s drinking too much to fly tomorrow.
I’m laughing my head off because I’m on the other side of the world for one night.

We’re finally lining up our intake. Within a beer or two, we should all be synced, and we’ll head out.
Until…

In walks the American businessman on his way home from Russia!
“English speakers! Great!” He joins us, and orders a beer.
And around we go again…

Relax. It’s only worth a bag of pretzels.

Around 2 am (my flight is at 9), I stumble back to my room. I wake up the next day at 835, with jet lag and a case of beer stomping on my head.
And with an energetic “CRAP!!!”, I grab my stuff and run to the lobby. Where I find American Businessman has held the shuttle for me.

We get to the airport (basically a coffee shop with a reaaaallllly long road behind it) where we drink jet fuel sold as coffee.
And then wide awake, get on a plane for a 14 hour haul to Miami. (Don’t ask.)

After trying to explain to the customs guy why I was in Turkey for one night, I found a palatable cup of coffee, and sat in the parking lot of Miami International and chain smoked for three hours until my connecting flight to NYC.

And I even made it to class on time.

So on those rare occasions when Turkey comes up, with more pride than brains, I chime in, “Turkey? Been there.”

Tagged How'd he get off the no fly list?, Istanbul, They Might Be Giants, Travelin' Man, Turkey vs turkey, waaaay too much beer