I don’t know where I’m going…

…But I know where I am right now – over at Running On Sober with Michael from Good2BeGone doing Life In 6 Songs for Christy, CK Hope and Mama Mick.

Check it out, and you can even submit your own playlist!
(And comment over there too!)

Well, that was unexpected. Almost didn’t make it here this week. Fortunately, there was some sleeping going on by others that let me grab enough time to cobble this together. So the planets aligned, and here we are, on another glorious Friday!
And despite having no time to post (yesterday’s took several days to write and still felt hurried), I did manage to get some good reading in.
Thypolar’s daughter did really well at the National American Miss competition.
Edward Hotspur is continuing his exploration of 80s music with a poll on the Best Band of the 80s. Smaktakula Came Out in support of gay folks . Probably about as supportive as he’ll ever get, and we sincerely approve! And Pudding Girl nominated me for a One Lovely Blog Award. If you aren’t reading her, you should really take a minute to check her out.
Thanks to them and everyone else for the great reads this week.
I’m looking forward to catching up on the stuff I missed as soon as I get a chance.
But no time for that now. Because we have to go over last weeks adventure! 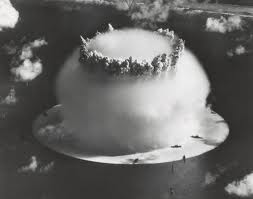 A bit more explosive than I meant…

Last week, in the midst of a plethora (ok, two) national festivitudes, we jumped on the spirited bandwagon and asked how you’d celebrate. Or specifically, asked you to finish the thought I Want To Blow Up…
And boy, did you guys not disappoint! Here’s what you said. (As always, my comments sparkle in italics):

Ted Nugent, just because I think the world would be a better place. Live Clay
(Okay, but do it in a quarantined environment, in case cat scratch fever is an airborne disease…)
In communist Russia, up blows YOU! – Hotspur
(Sure, until it collapses under Gorbachev’s forehead tattoo…)
Donald Trump’s hair to see if it moves. Lvernon
(Could we blow up Donald Trump instead and just donate his hair to science? Or the circus?)
Gallagher (for those poor watermelons) Carrie Cannibalistic Nerd
(Revenge is sweet! And has a thick rind.)
the flag. Our flag, your flag, all flags. I just hate them. butimbeautiful
(Sounds like you’re waving the white flag.)
because blowing down isn’t as much fun. sandylikeabeach
(Up and down are relative to how you’re… nevermind.)
another kiddie pool that I can keep pee-free for me: Jenn Worrell
(Aren’t “kiddie pool” and “pee-free” mutually exclusive?)
the penguin on top of the TV. –cowgirliz
(Wouldn’t it be smarter to blow up the penguin in a big empty field instead?)
doll! blow up doll. deluxe please. Lizzie C.
(Doesn’t deluxe come with anchovi- Ohhhh. nevermind.)
My husband! 😛
(But then who would you have to blame stuff on?)
I cannot answer this question without legal representation (Elyse 54.5)
(Surely the statute of limitations has run out on that by now…)
my television provider…asshats! ugh…KJ
(You could make it a pay-per-view special!)

Congratulations to Nicole Marie for this weeks winning answer! And from the offered choices, the most popular was Can’t we all just get along?!? Everyone who voted for that needs to start running the world. Now.

And once y’all are ensconced in your new positions of power, let’s consider this week.

Nope. Don’t need air conditioning. But let”s not talk about the heating bill…

It’s been hot. Fry an egg on your bald neighbor’s head hot.
Well, maybe not that bad (and I don’t suggest trying it)(But if you do take pictures!!!)
But pretty darn hot.
So how do you do it, folks? How do you keep your temperatures from running too hot?
That’s the question of this week’s poll. Answer honestly, answer often. But answer soon. Because this one closes at 2359 EST on Thursday, 19 July.
And if you leave a way to identify you in your “other” answer, I’ll link back to you next week when we (hopefully) do this all again.

And to keep you entertained until next time, I thought we’d stick with the theme of great comedians.
First off, Jonathan Winters

And to finish up, Lucille Ball.

Have a great week everyone! See you ’round the sphere.